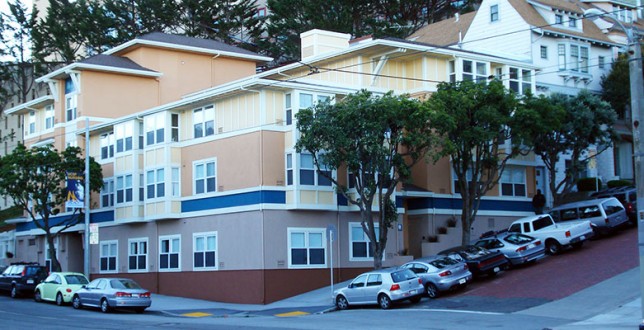 Completed in August 2006, 145 Irving Street represents one of the goals of UCSF’s 1996 Long Range Development Plan (LRDP), which is to revert currently-owned office buildings into student housing.  The 4-story building has a 1-level podium built on a slab-on-grade foundation with three levels of wood-frame housing above.  The site included a severe slope so it was necessary to build an 18-foot retaining wall.

The building is 17,000 square-feet and has 18 two-bedroom, one-bath units.  All 36 rooms have been rented to single students and postdoctoral students.  The housing features large bedrooms, double-paned windows which reduce street noise, high-speed Internet access and fully-equipped kitchens with dishwashers.  There is a common laundry room and two rooms for secure bike storage.  Some of the third and fourth floor units have views.  Due to its proximity to both public transportation and the campus, the project does not include parking.

"Having Nibbi Brothers as the contractors on the UCSF Student Housing project allowed me to feel confident that our project would come in on time, within budget and be expertly done. All members of the Nibbi team were great to work with and they exemplified the concept of team work with their willingness to do whatever it took to get the job done right. It made for a very satisfying and rewarding job and one which was widely recognized by the UC system as one of their most successful, thanks to Nibbi Brothers. I look forward to working with them again."